“John Akomfrah is the greatest living artist,” says the museum director and one thinks: Yeah, sure – take it down a notch, buddy. “Purple” is the title of Akomfrah’s work, which will be on view at the Museum Kurhaus until July 5. There is only one room – showing a 60-minute film. FortheloveofGod one thinks, and enters…

… What comes next is difficult to put into words. Heart and soul are at full capacity – already after the first seconds. A word makes its way into the mind: Overworlding. On view is – on 6 big screens – life itself: yours, mine, ours. One travels into a world one thought one knew. One travels into a projection that has nothing spectacular – no parade of special effects. After three minutes, one wonders why one is on the brink of tears. A film settles on the soul and makes one sensitive. Every image says: this is you all. This is us. One sees images from the past – people working away at life by leading it. In between one thinks: everything you see is long perished: joy, suffering, noise, quiet. Then the images slide back into the now: a quiet floating begins. The room is flooded with beauty and all the curses and blessings the industrial age has to offer. It’s written nowhere, nobody says it, but one intuits: The world has only this one attempt. The understanding arrives in images. Melancholy was somehow present immediately.

Each of the screens taken by itself narrates in a calm flow. Akomfrah’s “Purple” pulls its energy from simultaneity. What takes place there cannot be described, cannot be summarized. What takes place there – let that be said as well – does not have to be for everybody. But: Whoever is open to this re-enactment of reality, dives deep into their own thoughts and becomes a pillow that is being sprinkled with life.

Here, somebody prepares to land in understanding – makes suggestions for perspectives for those who don’t put on airs, and one can imagine that, long after we’ve all disappeared from this planet, “Purple” will still be on view. One is reminded of “Soylent Green,” a film about the end of times, where Edward G. Robinson lies dying in front of a screen, where the world shows its beauty while one can hear Beethoven’s Pastoral Symphony. Everything – everything changes: the world, the music, life, thought. Robinson dies and is turned into “Soylent Green.” Where this film from the 70ies recreates reality and fills it up with cinematic emotion, somebody like Akomfrah bets on nothing but observation and instrumentation. Instrumentation is not instrumentalization. Akomfrah listens to pictures of the world with the stethoscope of the camera – gathers material from the archives and the present and becomes – without explanations – a story-teller. Maybe one does not need to sit and watch for 60 minutes, but one thing one has to do: turn of one’s head and completely turn into a sponge. What follows then is a somehow indescribable experience of discovery, at the end of which one thing, however, is not to be found: a solution.

In 1977, NASA launched two space probes. Goal: the exploration of the outer planetary system. On board: data disks. The addressees: aliens. On the disks: the description of our world: in sounds, images, data. One should, one thinks, when “Purple” has closed, recall the probes and add precisely this work. One cannot say much more about the world. One should watch a piece of “Purple” every day and feel what one can learn from the world. Akomfrah allows one to feel what art can do, if it leaves space and does not interfere. Somehow, one thinks of Michaelangelo’s creation of Adam: two fingertips are touching… 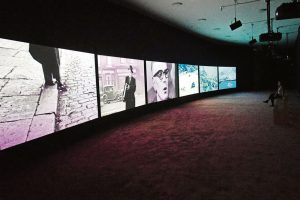